12 Tourism Workers Go Above and Beyond 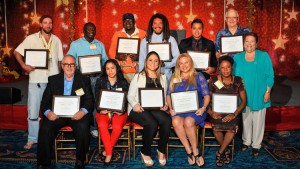 Congratulations to our Housekeeping Supervisor, Rolande Paul, for receiving the Sunsational Service Courtesy Award for going “Above and Beyond”! Rolande was one of 100 nominees and was one of 12 final winners. The award was presented to her yesterday by Convention and Visitors Bureau President, Nicki Grossman.

These workers make memories for tourists

It all began with a simple question from the hotel concierge: Have you been to Fort Lauderdale before?

The guest from New Zealand said he’d never visited, but he mentioned that he and his wife had hosted a U.S. exchange student in 1975. They remembered her name but had lost track of her whereabouts.

Hyatt Pier Sixty-Six concierge David Ivy decided to try to find that student for the guest. He spent more than two hours searching the Internet, making phone calls and found her. When the visitor returned from his tour, he found a phone message in his room from the student.

“The 85-year-old guest had tears in his eyes that someone would care enough to go to that trouble to make someone happy,” his employer said in nominating the concierge for a SUNsational Service Courtesy Award for 2015.

Ivy was one of 12 winners announced Thursday for the annual awards given by the Greater Fort Lauderdale Convention and Visitors Bureau to recognize outstanding service by hospitality employees who directly serve Broward County visitors. About 400 people attended the awards luncheon.

“All 157 nominees are tourism heroes that embody the highest standard of quality and are essential to the destination’s success,” Bureau president Nicki E. Grossman said in a statement announcing the winners.

Vidya Balakrishnan, sales coordinator, Crowne Plaza Fort Lauderdale Airport/Cruise Port. When a woman checking out said she’d spent the night at the hospital with her husband who died that morning, Balakrishan bought the guest and her son two meals to go – with her own money.

• Nadine Bankley, director of sales at Rodeway Inn & Suites Fort Lauderdale Airport/Cruiseport. When a guest called to say they’d left a bag at the hotel with their wedding bands in it, Bankley drove to the seaport to deliver the bag for a cruise wedding. When the guest brought Bankley a bottle of wine as a gift after the cruise, she asked the couple to drink it on their first anniversary.

• Nevoyel Belonce, taxi driver for Yellow Cab. When a tourist had a heart attack in his taxi, Belonce called 911. He then kept in touch with the man in the hospital, drove his wife as needed even brought a phone charger from his home to the couple when they couldn’t find one for their phone model.

• Santiago Navarro, front desk supervisor, Sonesta Fort Lauderdale Beach. Navarro helped a customer find the perfect place to propose to his girlfriend: in a room with a ceiling-to-floor ocean-view window on a high floor, with rose petals on the floor, plus champagne, strawberries and chocolates.

• Tracy Olivera, customer service representative, Broward County Aviation. Olivera escorted a Spanish-speaking passenger with a medical condition from a plane to the hospital, stayed by his side and escorted him back — outside of her normal workign hours.

• Rolande Paul, housekeeping supervisor, Lago Mar Resort and Club. Paul cared for a customer dying of lung cancer as if she “were her own mother,” even helping to change her clothes.

• Lucia Rosa, assistant front office manager, Bonaventure Resort & Spa. Rosa gave her own money and rallied co-workers to raise $160 so that a mother facing a sudden financial problem could pay to spend a final night at the hotel with her three chidlren.

• Matthew Spokony, Segway tour guide, Segway Fort Lauderdale. After two visitors from Germany had a tour cut short by flooding, Spokony arranged the next day to take them on a key part of the tour they’d missed — at no charge.

• Joseph Wilcox, receiving agent, The Riverside Hotel. Wilcox kept searching after others had given up and found the iPhone misplaced by a hotel customer. “The guest was so ecstatic,” the nomination said, “that in a moment overcome with joy, she leaped into Joseph’s arms for a photo.”