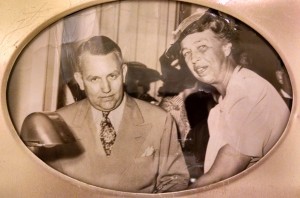 Hi! I just wanted to share with you that today, April 18th, would have been my grandfather’s 118th birthday if he was still alive. I still miss Sidney, as we called him, and think of him often.

We only knew him as Sidney because he did not want to be called grandpa and have anyone think he was old. He was a great man and spoiled me so much. It is because of his hard work and that of my grandmother, Tutu, and, of course, my dad that we have what we have today. Sidney was definitely a self-made man, working his way to becoming a manager of the prestigious Cavalier Hotel, in Virginia Beach, VA, when he was just 31. He then became a managing partner of the Cavalier Jefferson Corporation.

What brought him to Fort Lauderdale was that, at one point, he had the idea to move the Cavalier staff from Virginia to Florida during the winter months to work at Lago Mar (The Cavalier was closed in the winter months and Lago Mar was closed in the summer back in those days. Eventually, he fell in love with Fort Lauderdale and could see all of the opportunity down here.

My dad was 17 at the time, so Sidney and my grandmother, Tutu, moved with their son to Fort Lauderdale in 1960 and that is where the devotion to Lago Mar began. Both of my grandparents worked throughout their entire lives, barely taking any time off to relax or enjoy down time. I still remember walking through the dining room holding hands with Sidney and feeling so proud and lucky to be with him! I miss him a lot and wish him a happy birthday in heaven.